My Thoughts and Reflections

“What does love look like? It has the hands to help others. It has the feet to hasten to the poor and needy. It has the eyes to see misery and want. It has the ears to hear the sighs and sorrows of men. That is what love looks like.” – Saint Augustine

That is what love looks like.” – Saint Augustine It was about 6 weeks prior to the Sydney Murugan Temple Annual Dinner 2008, that Vara Uncle approached me to get some information about the two Girls’ Home run by Social Welfare Organisation (SWO) in Thiru-Pallugamam and in Chettipalayam near Kaluwanchikuddy in the Batticaloa District of Eastern Sri Lanka. About a month later I went to see Vara Uncle with the Video tape I received from my contact in Batticaloa. When we both sat and watched the video of the young girls from the Home, both of us struggled to control our emotions. Quite often we see or hear about human misery in many parts of the World, naturally we feel sad about it and in most cases that’s about it. In some cases we may make a one-off donation to address the immediate need. However, only when love responds as noted above by Saint Augustine, could a foundation like the Mahaliar Illam Foundation could come into existence. I take this opportunity to commend the ‘Fund for Mahalir Illam’, in Sydney for their selfless service to the young girls who are in need of love and care.

As part of a short private visit to Batticaloa, I visited Thilakavadiyar Girls’ Home on Sunday the 27th September 2009. The members of the Executive Committee of SWO met me in their office in Kaluwanchikuddy, and briefed me about their activities. I was surprised that SWO not only runs the two girls homes, but also provide various other community services such as providing computer training for school leavers, provide credit facility to young widows etc.

After the meeting, we set off to Thiru-Pallugamum village, which is located about ½ hour drive away from Kaluwanchikuddy. After clearing three military check points, we finally arrived at the Girls’ Home. The girls, the president of the Home and the staff warmly welcomed us to their home with a garland. Despite the hot weather the large number of beautiful trees that surround the Home provided a calmness and quietness within myself as I entered the Girls’ Home.

The staff gave me a general introduction to the home with details such as how the home was founded and the key milestones. They shared many stories of happy and joyful times in the Home, despite the not so happy environment from where the girls came from. I was also told about the grim times in the home’s history, where the girls have to abandon the home, when the military moved in to Pallugamum village. The management team and the girls were so excited and thankful about the formation of The Fund for Mahaliar Illam in Sydney. They are all hopeful that the fund will help them provide necessary support to get a better education in life, build a better life for themselves and to become better citizens. During my visit 15 of the girls, including the one that I sponsor were not present at the Home, as they had gone to Colombo to take part in a drama competition organised by a “Samurthi”, a program sponsored by a Government agency.

I got into conversation with the girls, while enjoying the refreshments. The youngest girl was seven years old, who had come to the Home when she was 3 years old. She was very shy; however she was right in front of the girls to see me and to hear what I was going to say to them. I wasn’t too sure whether she understood who I was or why I came to see them; but she was so excited that there is someone to meet with them. There was a sense of excitement and overwhelming joy amongst the girls knowing that someone had come to visit them. There were all in the best of their clothes, neatly combed and tied hair style and all showed me the best of their smiles as well. Despite having gone though some serious challenges in their lives, they all shared special friendship and bonding amongst themselves. They are supportive of each other; the older girls act as guides and counsellors to the younger ones. 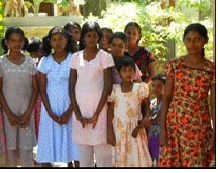 Most of the girls were very shy, however some of them had the courage to come out of it and share their stories with me. Many girls told me what their ambition in life is. I was pleasantly surprised to see that their ambitions were not very different to the ambitions of kids that I meet in Sydney. Some of them want to become teachers, some nurses and one of the girls said that she would like to be a doctor. All of those who shared their ambitions with me said they want to serve their community to the best of their abilities.

Older girls who are just about the finish their high school studies shared a sense of uncertainty about their future and I could also sense the feeling of sadness that they have to leave the Home in the near future. Despite all this I could also feel the friendship and warmth they had for one another. Despite the conditions at the Home, the girls were very happy. They agree that they face hardship in life, but they feel fortunate that there are people who care about them, the girls are greatly thankful for that. 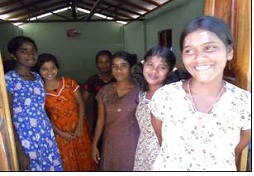 Later I had a tour of the Girls’ Home; Thilakavathiar Home consists of three buildings, which is located in two adjoining properties; two homes accommodate the 60 odd girls, and the staff. There is a prayer hall, which is also located within the main premises. The two homes are of moderate size, if I remember correct they consist of 4 bedrooms, and a living room in each home. One of the rooms in the first house is used as a library (with very limited number of books). The living area in the 2nd home is used as the entertainment area, with just one old TV set and just empty floor for the kids to sit and watch TV. Another room in the second home is used as the dinning hall for the kids, again with no furniture what soever. T he two homes have 6 toilets in total for the use of the 60 odd girls. There is of cause no bathrooms in the home, however there are two wells and enclosed area for them to have a shower (just like in most homes in typical Sri Lankan villages). – see pictures attached below

What made me sad and stuck in my mind the most is the fact that the girls don’t have any personal space at all. They don’t have cupboard or even a locker of their own. Most of them keep their belongings in a suitcase or a travelling bag. There are no beds in the Home, no desks for the kids to sit and study and do their homework. They just sit in the bare floor and do their studies. There are few small chairs and desks in the prayer hall, but I didn’t find them suitable for studies. The girls don’t seems to worry about this, however for an outsider like myself it was obvious that such basic facilities like study table and locker will make their life a little better and could help improve their studies.

The other important issue I noticed was the lack of medical facility or trained staff or a first aider to take care of girls in case of any illness. When I made inquiries about the medical facilities, I was informed that if a child gets sick she has to be taken to Kaluwanchikuddy for medical treatment. If this were to occur during night time, they have to wait till the morning, as people in the area do not go out after sunset due to security concerns. Hence, I consider setting up a small medical facility within the Home, to serve as a basic need for the kids. Such facility could also be used to serve the poor people in the local community.

As I noted above a group of 15 girls were not at the Home, when I visited them. I was informed by the matron of the Home that these girls took part in a drama competition at local school level and got selected for performance at the district level, where they competed against several leading schools in the Batticaloa district and were selected to perform at national level in Colombo. This goes to show that these girls are second to none in their talents and abilities. Just a little bit of support and guidance will help them find their purpose in life and to bring the best out of them. I have no doubt in my mind that the assistance provided by the Mahaliar Illam Fund in Sydney will do exactly that.

I must note the dedication and selfless service of all staff involved in running the Girls Home. They have families to look after as well, and they the salary they received in return is less than $40/- a month. I would like to urge the foundation to include this as part of their “to do list” the welfare of the staff should be attended to.

As a concluding note, I would like to kindly request members and sponsors of Mahalir Illam Fund to make an effort, where possible to visit the Girls’ Home, if they happen to go to Sri Lanka. I can’t describe in words the joy and happiness you bring to these kids when you visit them in person, as they come to know that there are people who care about them.